Starting date: As soon as possible

Qualifications: A genuine interest in evolutionary biology and the evolutionary ecology of plant-animal interactions. Willingness to work extensively in the greenhouse.

Summary: This project will focus on the evolutionary potential of flower traits in plant populations, the understanding of which is central to predicting the consequences of changes in pollinator communities. Working in the greenhouse, the student will perform crosses and measure phenotypic traits on the blossoms of Dalechampia scandens, a bee-pollinated tropical plant. Data analyses in R will involve state-of-the-art methods in quantitative genetics. The student will have the chance to learn practical and analytical methods in quantitative genetics. 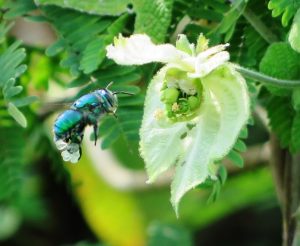 Project description: Natural selection acting on phenotypic traits is the principal driver of phenotypic evolution in natural populations, but how populations respond to natural selection depends on the genetic architecture of the phenotype under selection. This can be studied by estimating genetic variances and covariances of specific phenotypic traits, and by translating these into heritabilities (proportion of the phenotypic variance that is genetic) and evolvabilities, which provide a direct measure of the evolutionary potential of each trait. In this project, we will focus on the quantitative-genetic architecture of the blossom inflorescence of the tropical plant Dalechampia scandens. All Dalechampia species have unisexual flowers aggregated into bisexual blossom inflorescences, which act as the pollination units. The potential of populations to adapt to changes in pollinator communities depend on the evolutionary potential of blossom traits. Working in the Lund University greenhouse, we will perform a large number of crosses among individual plants originating from natural populations in Costa Rica, thus generating full-sib and half-sib families. These data will be analysed by fitting state-of-the-art quantitative-genetic models in R. By estimating genetic variances in traits and comparing these to existing estimates from Mexican and Venezuelan populations, we will assess whether the genetic architecture and evolutionary potential of the blossom differ among regions.