This project tests the effects of invasive species on prey abundance and function. More specifically, the project use an experimental approach to test how the invasive predator the Harris mud crab effect its prey, blue mussels and the filtering capacity of the mussel population on marine algae.

Required qualification: We are looking for a highly motivated student interested in the biology of invasive species and experience in working with live animals.

The Baltic is a species poor system sensitive to invasions of alien species. Recently, the Harris mud crab and the Round goby have invaded the system and locally reached high abundances. Both these species consume blue mussels, the most important benthic filtering species and responsible for clearing large quantities of water from algae. Hence, blue mussels play an important role for preventing algal blooms. Due to the low salinity, the Baltic Sea is not occupied by any native crab species. The low salinity has also been thought to cause morphological differences between mussels from the saline west coast and the brackish east coast of Sweden, leading to east coast individuals being smaller and with thinner shells. Here, we will make an experiment testing if the observed morphological differences between mussels from the Swedish east and west coast are caused by differences in salinity, presence of mussel predators, or a combination of both. We will also test whether or not native and invasive species have similar effects on mussel morphology and behaviour. The results will have important implications for the projection of future distributions of invasive species as well as the ecosystem function of the Baltic Sea, mussels being important filter feeders. The project is run together with the AlienAllienceresearch group at Aquatic Ecology. 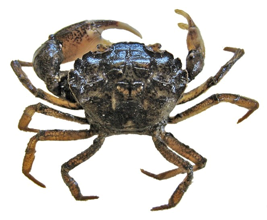